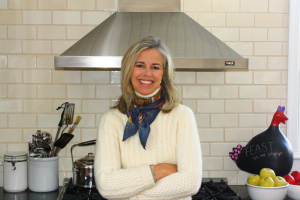 About Mary Anne Rittenhouse:
For the past 20+ years, Mary Anne has worked as a professional caterer dishing up everything from haute cuisine to comfort food using a blend of original recipes and re-worked family favorites, courtesy of her mom and “nana.” Mary Anne’s mantra is simple: she believes that delicious, healthy, homemade food should be easy and accessible – and shouldn’t require a massive bank account.

Food – its creation and consumption – has been the one abiding constant in Mary Anne’s life. Raised in the tradition of home cooking and baking in post-World War II Levittown, Mary Anne followed in her mother’s and grandmother’s footsteps and supplemented the family income with her own catering business, “From Rittenhouse to Your House.” Today, she continues to cater intimate weddings, anniversaries, dinner parties, luncheons, large cocktail parties and formal afternoon teas.

In the late 1990’s, Mary Anne went back to school on a writing grant at Sarah Lawrence College, ultimately graduating in 2002. However, because of financial demands, she put her dream of writing and cooking full-time on the back burner and resuscitated her expired nursing license, returning to work in the operating room after a 20-year absence.

Ironically, it was in the O.R. that cooking once again took center stage as Mary Anne began baking special cakes and pies for co-worker’s birthdays. When she embarked on the creation of her first cookbook, which she is currently finishing, her experiments traveled with her to the O.R. as she used doctors and nurses as guinea pigs, sampling her latest creations.

Each of Mary Anne’s careers has somehow incorporated the drama, staging, design, and production of wondrous fare. It is her hope that her latest adventure, Feast on the Cheap, will excite and inspire, but never intimidate. 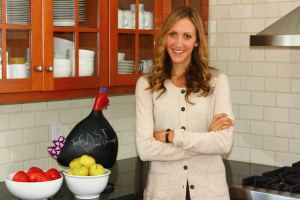 About Mariel Goodson:
Growing up in her mother’s kitchen, Mariel learned the language of cooking at a young age. While the neighborhood children were chowing down on hot dogs and burgers, she was taste-testing rack of lamb, Scotch broth and tea sandwiches.

Today, Mariel enjoys experimenting with different flavors, textures and cuisines in her own home. She derives inspiration from her mother’s time-tested catering recipes, twisting, transforming and reworking each dish until it suits her more modest budget….and burgeoning culinary skills. Throughout Feast on the Cheap, you’ll find a wide variety of these “dueling dishes:” Mary Anne’s highbrow creations, which are geared towards a more adept chef, off-set by Mariel’s less expensive, space-conscious renditions that are easy enough for even a fledgling foodie, like herself.

When she doesn’t have a spatula in hand, Mariel can usually be found sifting through swatches: she’s the co-founder of Brass Hill Design, a room-by-room interior design firm. Prior to launching her own business, Mariel worked as a home and lifestyle writer for magazines such as Martha Stewart Living, Redbook, Good Housekeeping, Better Homes & Gardens, SELF, and Hamptons, among many others.