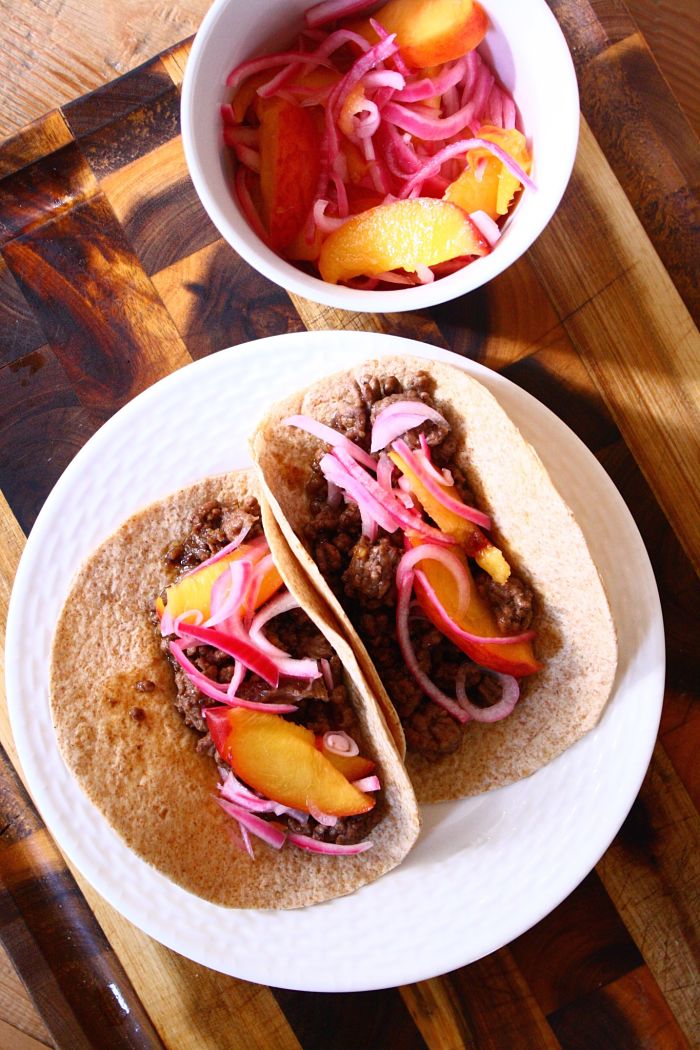 This recipe has been moldering in my brain, waiting to be written, for well over a month now. I think it’s because the first time I made these (delicious) tacos, the day ended with a toddler meltdown so massive I still shudder when I think about it.

The afternoon kicked off innocently enough. After plucking Manster from “nappies” at 2:45pm, I made plans to bring him and Baby Ice to the local library with one of my besties and her daughter. There was some guitar performance that promised to distract our kids for a blissful 30 minutes, allowing us a momentary reprieve from the endless parade of “Whys” and “What’s that” that pepper our days. It was gonna be great.

The “concert” went smoothly enough, but after it was over, my friend and I were hesitant to head back home where we’d inevitably stare at the clock willing it to strike bath time. So we agreed to bring the brood over to a neighboring park. Again. Everything went smoothly enough.

But then it was time to head home.

Being three, my toddler has a very shaky grasp on consequences – ditto for his own mortality – so as we were exiting the park, he bolted into the parking lot and within striking distance of a minivan that was inching forward. A sumo-sized baby strapped to my chest, I heaved myself into the road, snatching him out of harm’s way and up into my own arms. I was pissed and let him know what a bad idea his plan was, but I otherwise kept my cool, even as I was awkwardly hefting a combined 45-pounds of weight on both hips.

As we approached the main road, I had to put Manster down for fear my arms would actually detach gorilla-like at the sockets. I pleaded with him to hold my hand – which is obviously the ultimate insult when you’re a toddler – so he went completely boneless in the middle of a busy street. Just a sack-of-potatoes’ worth of dead, furious weight. Sweaty and exhausted, I managed to get him across the road – again, a sumo-sized baby is strapped to my chest – and into his car seat. I did it.

And now the tantrum begins.

Clearly, saving his life twice was a huge slap in the face and now he was gonna make me pay for it. He’s screaming in his car seat. All the way home. Inside the house. While I prep dinner (these tacos!). And straight up until Nana walks through the door half an hour later. A full half an hour. Of screaming. At me. All the time.

I had stayed calm for the first 20 minutes of his freakout, expecting it to blow over – a mantra of “ignore unwanted behavior” replaying over and over again in my head. But because I am such a jerk for preventing him from being squashed by a Honda Odyssey, he was blazing hotter than a thousand flaming suns. There was no burning out. He was going to be like this forever. So I yelled, REALLY LOUDLY. I stomped my feet. I tore at my hair. You know those Japanese kabuki masks? I turned into one of those.

Sadly, it did not have the intended effect and instead, we ended up in a sort of tantrum thunderdome, aggressively trying to out-yell one another. I was crying. He was crying. Nana was terrified. The baby was somewhere. It was awful.

So after all that, we ate tacos. We ate them so quickly and so angrily I don’t even know if I tasted them.

Weeks later, after the memory of our mutual mental breakdowns started to wane, I remembered eating said tacos. And I remembered them maybe tasting really good. And I also recall, that amidst all the insanity of that afternoon, I actually prepped a meal, pickled things, and got it all on the table…hot. So yeah. It felt like these might be worth revisiting.

And as it turns out, when they aren’t being scarfed down with a huge helping of fury – and just the slightest soupcon of crow – they are delicious. A last-minute meal through and through.

Directions for Pickles:
1. In a lidded glass container, whisk together the vinegar, sugar and salt. Add the sliced peaches and onion. Refrigerate for at least 15 minutes.

Directions for Tacos:
1. Preheat oven to 350 degrees. Wrap tortillas in foil and warm for about 10 minutes.

2. In a large skillet, brown the ground beef over med-high heat. Crumble. Drain fat and set aside.

3. In a bowl, whisk together the soy sauce, brown sugar, rice vinegar, water, miso paste and red pepper. Set aside.

4. Add the sesame oil to the skillet and cook garlic over medium heat until lightly browned. Add the miso-soy mixture and bring to a boil. Reduce heat and simmer, uncovered, for about 5 minutes, stirring occasionally until it thickens up a little.

5. Return the beef to the skillet and cook through.