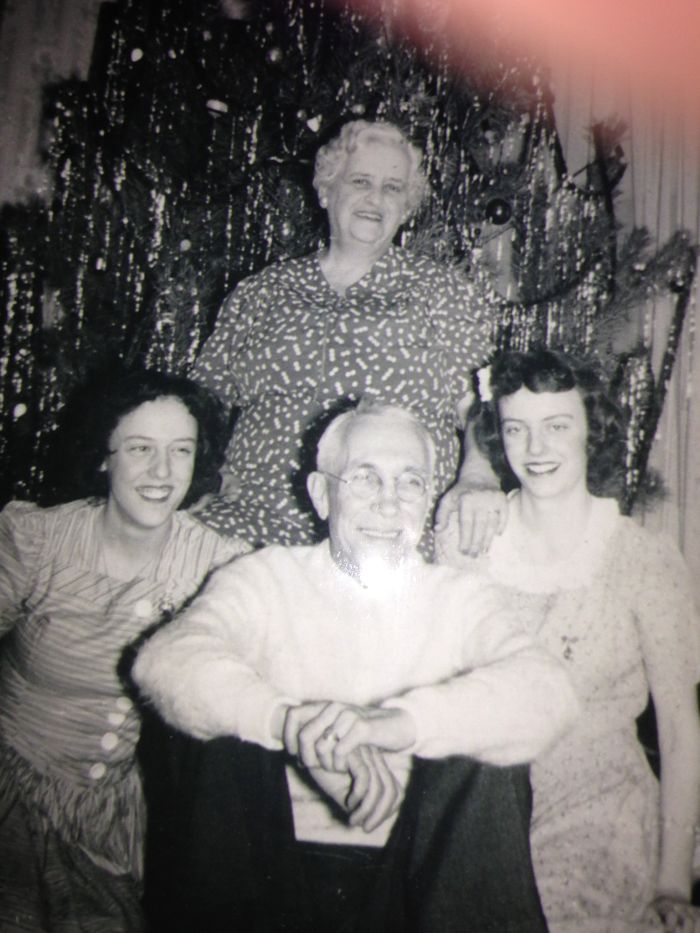 Mary Anne here. It is difficult to write this intro for two reasons. The first is that I haven’t written or posted in roughly four months so I’m feeling a bit tongue-tied. The second reason is the actual cause of my dry spell – my mom was diagnosed with a terrible, incurable, malignant brain tumor the week of March 4th. As my siblings and I scrambled to find the best possible surgeon and neuro-oncologist for our beloved matriarch, Mariel quickly and deftly assumed the helm of Feast on the Cheap. Enormous hugs and a thank you to my darling daughter.

And so, hopefully you all will bear with me for a moment, as I would like to say a few things about my mom before we get to the  reason you are here…a recipe. Actually, the two subjects are intertwined. But before we dish about my dish, allow me to share about the incredible, nearly invincible, ever-courageous Elizabeth Dean Moody Ellicott Freedman. (pictured on the far right, above) 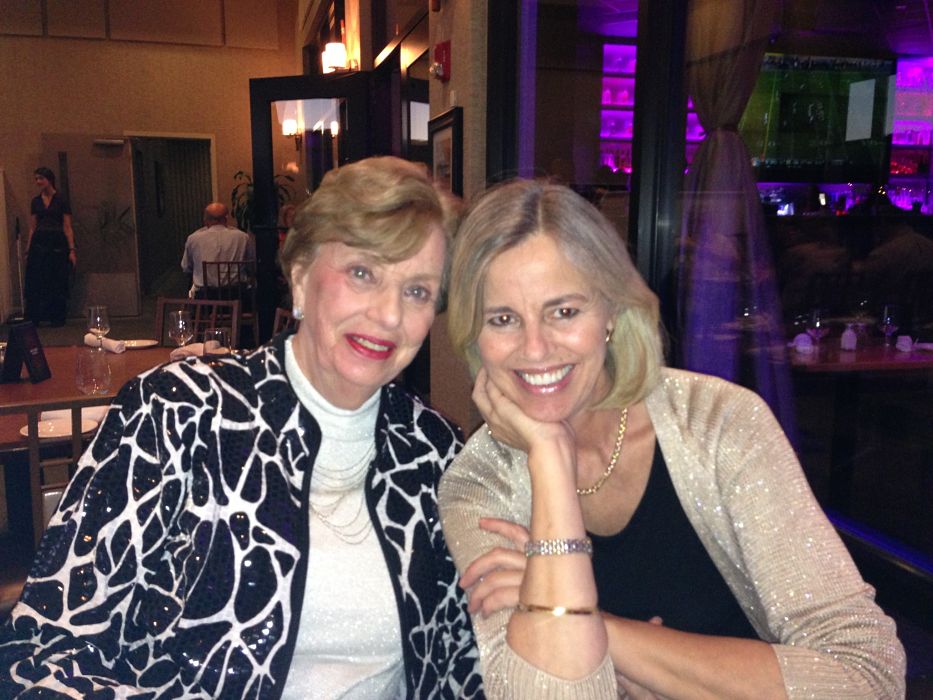 She was an ardent, avid, crazed, Mets fan. Not enough adjectives to paint her passion. Mom loathed the Yankees and was certain that the Mets will win the pennant again. She referred to the Yanks as snakes and swore it was so as they would rise to win – again and again. Her children truly believed that when the Mets swept the Yankees soon after Memorial Day that our Mom was “up there” pulling strings on those Met’s bats!

Elizabeth Freedman was also a converted Jew; by birth she was a true-blue WASP, having been born to a Presbyterian family, but then she met and fell in love with George Freedman, whom she married when I was 11. She was as passionate for Judaism as she was for her Mets and when she passed away Mom was honored with all of the traditions of her faith. The ritual of  bathing and preparation was bestowed upon her by the loving hands of the women of her Sisterhood, and then Vassar Temple buried her as one of their own. One day when we were driving to NYU for her daily radiation treatment, my mom talked to me about what her faith meant to her – how deep and abiding it was in her heart and soul, and that she has never felt more at home than in the bosom of her Synagogue’s family of friends, nursery school children, and Sisterhood. As I said to the Rabbi the day of her funeral, she may have been born a Christian but she died a devout Jew. Mazel Tov, Mum!

When my mother was diagnosed with the Glioblastoma, she was entrusted to my care a great deal of the time. It was a blessing. During those hopeful days and nights of surgery and then radiation, I was privileged to come to know my mother as a person – separate and apart from her role as a wife, mother, or daughter – just Liz, pure and simple. And in those 11 short weeks before she passed she taught me unforgettable lessons about humility and gratitude…Mom was likely the gentlest soul I have ever known and not once did she ever complain about her disease; its immediate and shocking recurrence post-op, her circumstances and increasing debility and dependence, all assailing her in rapid-fire succession. Mom looked forward to each day – each meal – each encounter with her children with faith, hope, and love. She believed nearly to the end that she would enjoy another day and so she accepted her disease, planned her future, and embraced every exquisite moment. Thank you Mum for these necessary lessons.

As I’ve written often in the past, my love for food – its creation and consumption – was borne at the tails of my mother’s apron strings. Mom was a natural in the kitchen, having worshipped at the altar of her own mother’s kitchen counter. And my sister, brothers, and my own children have all followed the path these indomitable matriarchs forged in creating fantastic fare.

Mom was a uniquely talented home chef – she excelled both at cooking and baking. I suspect it was due in part to her passion for all things delicious…whether sweet or savory. My mother, affectionately called Lizzie Dean by her brood of six, was baking for her friends and co-workers right up until the day she entered the hospital. At that time she was on deck to provide the Matzo Ball Soup and Chocolate Matzo Cake for the Jewish Center’s upcoming Passover Seder, but sadly she was too busy trying to get well to attend.

Until the end, my mom had an enormous sweet tooth and even when she was too weak to converse she uttered, “Oh, that tastes good” as I gently fed her a “Nilla Wafer”. It was one of the last things she ever said. Go, Mom!

And so at last, we get to the recipe at hand and the inspiration behind its creation. 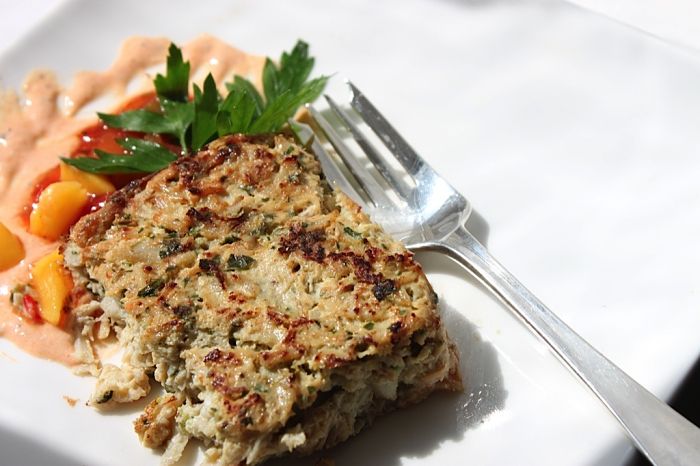 As a mother-daughter duo, at times Mariel and I like to duel with our dishes – she lightening up some of my saucier, complex recipes while I like to add pinches of flamboyance to some of her simpler samplings. I thought to memorialize my beautiful and talented mom here with a similar duel, and answer one of the childhood staples she served up every single (when we were Catholic) Friday night while I was growing up. (Drum rolls here.) The.ever-popular.1960’s style. Tuna Noodle Casserole, complete with Campbell’s canned mushroom soup for the cream sauce and processed breadcrumbs sprinkled across the top.

My humble offering is basically our Crab Cake recipe, sans the breading, en casserole. It is a snap to prepare – under 30 minutes before it’s ready to bake and the result is just a little slice of heaven as I tip my chef’s hat to my beloved Lizzie Dean, a.k.a. Mom. Go Mets!

Directions:
1. Preheat the oven to 350 degrees. Lightly oil or spray a 9×13 casserole dish.

2. In a large mixing bowl, combine the first 9 ingredients, whisking well to combine.

3. Using a rubber baking spatula, gently fold in the lump crab meat, being careful not to break it up TOO much.

4. Again, using the same rubber spatula, scrape the mixture into the prepared casserole pan, spreading evenly to the edges.

5. Bake for 50 to 60 minutes until puffed and beginning to turn golden around the edges.

6. Run under the broiler for a minute or two, until the top is golden. Allow to rest on the counter for 10 minutes before slicing. Serve with mango salsa and a remoulade if desired.