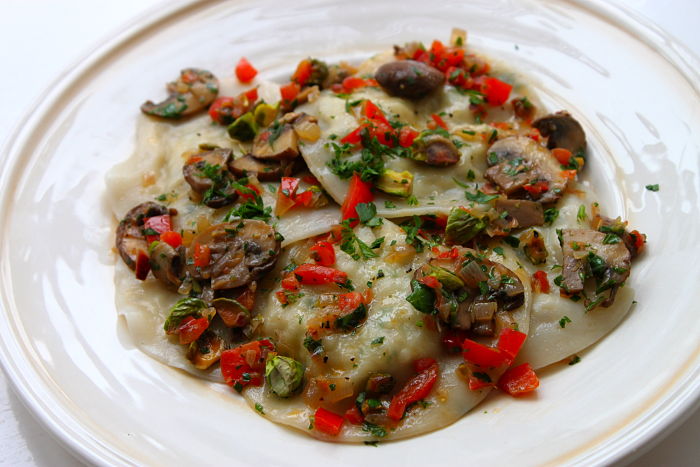 Mary Anne here. When I sent Mariel the pix for this recipe, I unabashedly called it the best creation yet! Now that’s pretty big talk, considering I’ve been cobbling together culinary inspirations for more than 25 years, but seriously folks – this recipe rocks!

It was born on the eve of this weekend’s snow blast when I had to hit the grocery store to restock my barren cupboards. While I was perusing the produce aisle – amidst the melee of shoppers in pre-storm panic mode – my eye alighted upon packages of wonton wrappers, something I haven’t used in quite some time. In the past, I’ve made dumplings and spring rolls wrapped with these easy-to-handle-skins, but having given up most deep-fried dishes for “healthier” fare, I’d all but forgotten about the multitude of uses for these rockin’ and rollin’ wrappers.

For whatever reason, crab seemed like the perfect foil for my burst of ravioli inspiration and initially I planned to top it off with some of my Vodka Sauce. But wait – there in the very next bin were fresh Cremini ‘shrooms and so this recipe – which initially was slowly percolating – roiled into a full-blown boil. All I can say is if you’re trying to impress the in-laws or some fancy guests, this baby’s for you.

Tip: Uncooked ravioli can be prepared the day before. Keep in the fridge, in a single layer on a baking sheet lined with waxed paper. Cover carefully with plastic wrap. If planning ahead and freezing all or part of the batch, place the baking sheet in the freezer. Once the raviolis have frozen, place in a sealed plastic bag and keep frozen until ready to use. Boil the frozen ravioli until it floats to the top, about 6 or 7 minutes.

Directions:
1. Prepare the ravioli filling by combining the egg, cheeses, Old Bay, parsley and salt and pepper to taste. Fold in the crabmeat until thoroughly combined.

2. Sprinkle the work surface with either flour or corn meal. Place half of the won ton wrappers on the surface. Cover the other half with plastic wrap until ready to use.

3. Place 1 Tablespoon of crab filling in the center of each won ton. Lightly brush the edges of the wrapper with ice water, all the way to the filling.

4. Top with a second won ton and using your fingers, press down around the filling to push out any air.

5. Using a 2 ¾ – inch biscuit cutter (optional), cut out around the centered filling to create a round ravioli. Press together the edges of the trimmed dough to ensure a good seal.

6. Store the prepared ravioli as directed in the tip above.

7. Prepare the Duxelle sauce. In a large sauté pan, heat the olive oil and 3 Tablespoons of the butter over medium-high flame.

8. Add the shallots and sauté for 2 or 3 minutes until golden.

10. Add the cooking sherry and bring to a boil. Continue cooking until most of the liquid has evaporated, about 2 or 3 minutes.

11. Stir in the parsley, pistachios, and the remaining 2 Tablespoons of butter. Cook, stirring until the butter has melted. Season with salt and pepper.

12. Meanwhile, bring a large pot of water to a boil. Add a splash of olive oil. Add the ravioli and lower flame, cooking the pasta over a gentle boil for 5 minutes (if fresh, not frozen pasta.) The ravioli will float to the top when it’s done. Using a slotted spoon, carefully transfer the ravioli to a colander.

13. Divide the pasta evenly between 4 plates and top with the mushroom and red pepper duxelle. Sprinkle with additional parsley if desired.