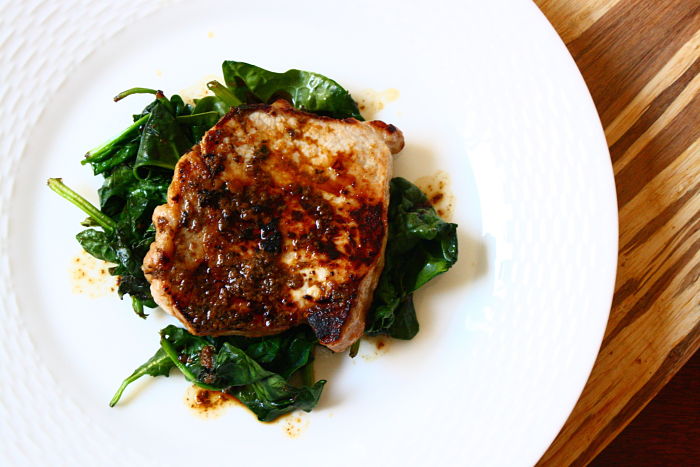 Mariel here. In my opinion, pork chops taste best when grilled…during a backyard BBQ…in 80-degree weather. Unfortunately for those of us who live in a cooler climate – or a tiny apartment – abiding by a grill-only preparation means never enjoying The Other White Meat. Chicken, fish, veggies and grains make up the vast majority of my weekly intake and although there’s plenty you can do with that broad of a spectrum, sometimes you just need something a little heartier to sink your teeth into.

While my mom is a pork chop pro, I’ve had my fair share of gaffes, including a memorable-for-the-wrong-reasons meal served to company. About a year ago, I invited a good friend over for dinner – she’s a fan of Feast so I’m sure she was expecting something scrumptious. Smug in my newfangled culinary skills, I decided to try out a new recipe starring a meat I’d never cooked with. Genius, I know. I marinated the pork chops in some awful apple cider/mustard concoction then popped them in the oven and expected a Michelin star to spring forth.

They were god-awful. The meat was dry, tough and chewy, and the marinade added a strange tongue-numbing bitterness, like unsuspectingly biting into a Sichuan Pepper. I also managed to screw up the creamed butternut squash, though I blame that on the vegetable: there was no amount of browned butter and sugar that could make up for its naturally stringy consistency. I haven’t since served pork to unsuspecting guests and I’ve been quietly attempting to master the art of the grill-free chop ever since.

At long last, I’ve finally whipped up a creation that I consider Feast-worthy: the key is marinading the chops in a spicy-sweet sauce and pan-searing – not oven-baking – the meat to seal in flavor without eliminating all of its natural juices. If the marinade seems familiar it’s because it was inspired by mom’s famous Herb & Honey-Marinated Sirloin, which could make a slice of shoe leather taste delicious. If you have any porky tips, do tell!

Directions:
1. In a small bowl, whisk together the garlic, soy sauce, wasabi, honey, ginger and chicken stock. In a sealable Zip-Lock bag, combine the pork chops and the marinade, making sure they’re coated evenly and on all sides – seal the bag. Marinate in the refrigerator for 1 to 3 hours.

2. After the meat has marinated, heat the olive oil in a large heavy skillet (preferably not non-stick) over med-high heat. Once the oil is hot, saute the pork chops, reserving the remaining marinade in the plastic bag. Saute the pork until cooked through, about 4 minutes per side. Set aside on a clean plate and allow to rest.

3. After sauteeing the chops, add the fresh spinach and 1 Tablespoon of the marinade to the same skillet and saute for about 2 minutes, until the spinach wilts, Stir frequently to prevent burning. Set aside.

4. Next, add the marinade to the same skillet and gently boil over medium heat until it thickens and reduces slightly, about a minute. Scrape up any dripping from the bottom so they get incorporated into the glaze.

5. Serve the pork chops on a bed of spinach and drizzle with the glaze.