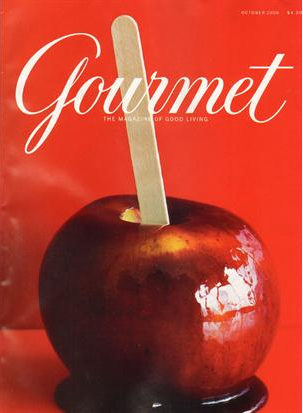 The news of Gourmet Magazine‘s untimely demise has left me feeling unexpectedly downtrodden – bereft almost – as though I have lost a beloved friend. The reality is that I, along with all of Gourmet‘s readers, will now trudge on without an invaluable resource in the great wide world of culinary education, edification and enjoyment. Gourmet made its debut in 1941 and has influenced several generations over the span of nearly 70 years and I imagine that with yesterday’s news, many of its readers are grieving with a similar sense of loss.

When I moved my catering business to East Hampton four-and-a-half years ago, not only did my cookbooks and personal recipes come along, but so did every one of my Gourmets. That first summer, I was the new caterer in town and business was slow initially. So, with time on my hands, (along with a sprinkling of anxiety!) I culled through magazine after magazine, clipping recipes and then sorting them into categories and seasons; ultimately preserving them between plastic sheaths purchased at Staples. I literally created cookbooks from those pages and neatly lined them up in their brightly colored binders alongside my “real” cookbooks.

That summer in Long Island with Gourmet was a reunion of sorts. I began reading the magazine in the 1980’s as I began to cater private parties in Bronxville. I learned volumes in those pages – food trends, pitfalls in entertaining, how to plan ahead, pairing wines with meals along with countless tips and pearls of culinary wisdom. I simply cannot imagine never again getting that rush of excitement and anticipation as I crack open the latest monthly edition. As you can tell, I’ve never been afraid of a little drama.

And so it is with a heavy heart that I say farewell to my dear old friend. In tribute to this venerable magazine, I am sharing two of my favorite recipes adapted from a early ’90s Gourmet. I changed the “formulas” along the way, adding my own personal touches, and often used these two gems to cater what I called a “Bistro Supper,” starting the meal with a Frisee Salad and finishing with a homemade Apple Pie. The Lamb Shanks do not fit the “Feast on the Cheap” criteria, but in memory of Gourmet, I’ll skip pinching pennies and calculating costs in order to fondly salute the memory of our dearly departed.

Note: Braising meat guarantees a moist and tender result.  By browning the lamb first, the flavor is caramelized and sealed and further develops in the roasting portion of the recipe. The lamb can be prepared through step 7 in the following recipe up to two days in advance. Return the lamb to the sauce and keep well covered in the refrigerator until the day of your dinner party.

Directions:
1. Massage the dry rub into the lamb shanks.  Allow the seasoned meat to rest for 45 minutes to a few hours in the refrigerator.

3. In a large, heavy pot, heat the olive oil over medium-high. Brown the lamb on all sides for about ten minutes.  Transfer to a roasting pan that will accommodate them in one layer.

4. In the original pot that you browned the lamb, sauté the onion and garlic until soft and translucent, about ten minutes.  Add the diced pancetta, bay leaves, and thyme.

5. Next add the wine, chicken broth, and canned t omatoes. Bring the sauce to a boil, scraping up the browned bits.

6. Pour the sauce over the lamb shanks.  Cover the roasting pan tightly with aluminum foil and bake for 1½ hours until tender.  Transfer the braised lamb shanks to a large platter, reserving the sauce.

7. Pour the reserved sauce into a clean stockpot, skimming off any fat that rises to the surface.  Bring to a boil and reduce the liquid to roughly 6 cups. This takes about 15 minutes.
Note: The lamb can be prepared up to this point one or two days before.
To reheat the lamb, bring to room temperature 2 hours before going into the preheated oven.  Cover the roaster with aluminum foil and bake at 350 degrees until hot – 30 to 45 minutes, depending on the size of the lamb shanks.  Continue with step 8 and garnish with reserved herbs.

8. To finish: stir the parsley and rosemary into the sauce, reserving a couple of teaspoons to sprinkle over individual servings.

Directions:
1. Place the beans in a stockpot with enough water to cover them by about a thumb length.  Bring to a boil; reduce heat, and simmer, uncovered for just 2 minutes. Turn off the flame, keeping the beans in the covered pot, and allow them to soak for one hour.

2. After one hour, drain the beans and return them to the same pot.  Add the onions, water, and chicken broth.  Simmer for 45 minutes until tender.

3. Drain the pot of vegetables, carefully reserving the cooking liquid.

4. Return the cooking liquid to the stock pot and bring to a boil.  Reduce the broth to roughly 1½ cups.  This will take about 15 minutes.

5. Pour one cup of the cooked beans into the bowl of a food processor. Add the olive oil, vinegar, salt, pepper, and reduced cooking liquid. Puree until smooth.

6. Combine the puree with the remaining whole beans and watercress.  Transfer to a 3-quart baking dish.
Note : The beans can be prepared up to this point one or two days before.

8. Combine the garlic, breadcrumbs, and grated cheese. Sprinkle over the top of the casserole and bake until golden and bubbling, about 20 minutes.