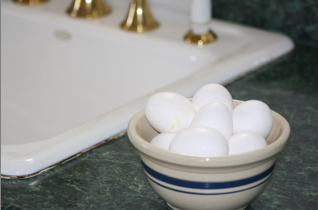 So, maybe the weather won’t cooperate today – I was hoping for sun, birds, bees, all that good stuff – but I’ve decided to salute spring with an Ode to the Egg. In the next few posts I’ll be sharing a few tricks, facts and recipes starring our friend The Egg.

I thought I’d start out with a few handy egg essentials. Eggs have gotten a pretty bad rap when it comes to counting carbs and calories. But the fact is, they are incredibly cheap, healthy and versatile and like anything in life, moderation is the key. So don’t worry about indulging because you really don’t want to miss out on the literally thousands of ways you can beat an egg. And of course, if you’re not convinced, you can always stick to just egg whites

To begin: Eggs are high in protein, Vitamin A and D, B12, and Tryptophan. (The Tryptophan is great for sleeping so if you’ve had a rough day at work, eggs for dinner is actually a good choice.) Eggs are 75 calories each, including the yolk. Egg whites are 30 calories per ¼ cup. (¼ cup of egg whites equals 1 whole egg).

A Few Facts:
1. The fresher the egg, the rounder and plumper the yolk. Aging eggs have a flatter yolk that breaks easily.

2. Egg whites whip up faster when they are at room temperature.

3. Egg whites will not whip into shape if there is even a trace of butter, oil, or yolk on the beaters.

4. Hard-boiled eggs keep for up to one week in the fridge. Deviled eggs will last two to three days.

5. Fresh eggs, in the carton will last up to four weeks.

6. Leftover dishes made with eggs will keep for three to four days.

7. Egg whites and separated yolks will keep for two to four days.

8. And here’s a great tip: You can freeze egg whites for up to a month! When I’m baking something that calls only for the yolk, I never waste the whites. I pour them into an airtight plastic bag and with a waterproof marker write how many whites I saved. I’ve used the frozen egg whites to make omelets for Mariel when she visits!

9. Allergies/Substitutes: In baking, eggs are a huge component, but you can substitute them with the following combination: For one egg, combine 1 Tablespoon of ground flax seeds with 2 Tablespoons of water and ¼ teaspoon baking powder.

10. When choosing eggs at the grocery store, always check the expiration date. Then open the container. After inspecting for cracks on the egg tops, roll each one individually in the container. If it doesn’t roll, it means it’s cracked underneath, it leaked, and then got stuck!

11. As for organic vs. regular – that’s a personal choice.

In the next post, I’ll outline a few cooking and usage tips, then I’ll share a new egg recipe I test drove this week.