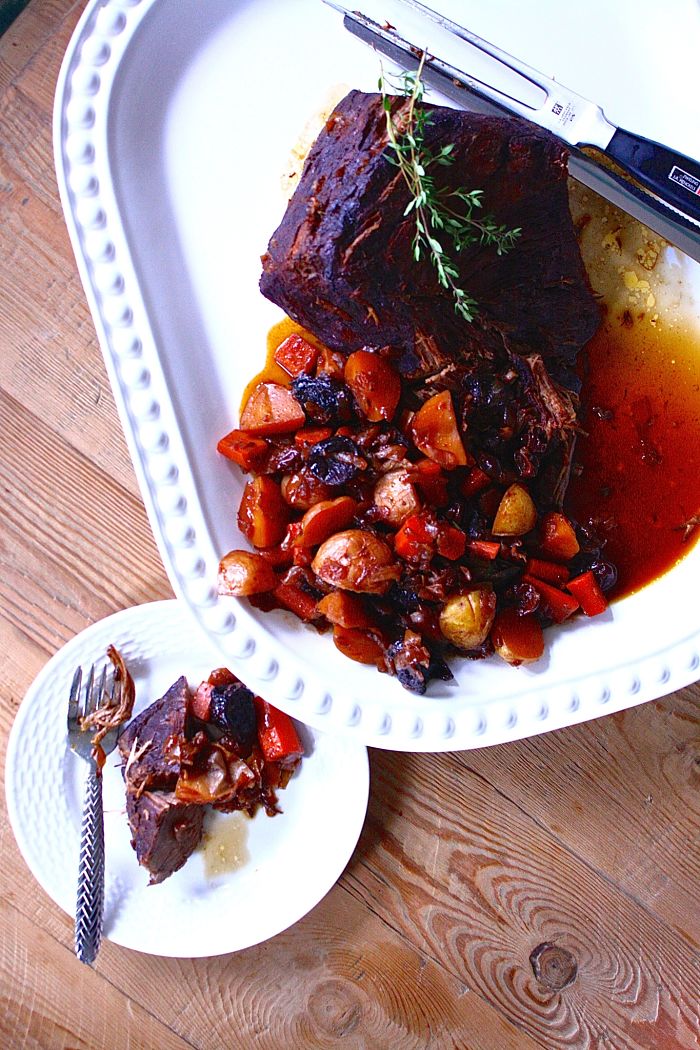 Brisket may be a hallmark of Hanukkah, but I think this delicious braised recipe works well for any holiday table. As we’ve mentioned before, we were raised sort of “pan-religious” as kiddos: we were confirmed Catholic courtesy of my mom, attended Sunday School with the Dutch Reformed thanks to my dad, and we often sat for Passover Seder with my Jewish-convert Grandmother. So to me, serving Brisket at Christmas just feels right.

This particular recipe is about as flavorful as they come in due in large part to a long braise – nearly four hours – in red wine that’s only been slightly diluted with beef broth. Added to the pot are carrots and new potatoes as well as dried prunes and tart cherries, which really sweeten the brew. It’s as delicious right out of the oven as it is a few days later and it also happens to make some pretty spectacular spinoffs, namely Brisket Sliders, Brisket Ragu and a Shredded Brisket Ramen Noodle Soup my mom promises to make me after the baby arrives. Truly a Christmaskkah Miracle.

Directions:
1. Preheat the oven to 325. Generously season the brisket with salt, pepper & paprika.

2. In a large Cast Iron 7-Quart Round Covered Casserole

, bring wine to a boil over medium heat. Reduce flame and boil gently for about 10 minutes (uncovered) or until the liquid reduces by about 1/3.

3. Stir the onions into the wine. Layer the seasoned brisket on top of the onions, adding the bay leaves, thyme and parsley. Place the lid on the pot and bake for 2 hours.

4. After 2 hours, add the carrots, potatoes, prunes, cherries and beef broth. Cover and bake for 2 hours, or until brisket is tender.

5. Place brisket on a cutting board and trim & discard fat. Tent with foil and set aside.

6. Using a slotted spoon, remove the fruit and veggies to a large bowl; cover and set aside.

8. Over a medium-high flame, bring the remaining braising liquid to a gentle boil (uncovered) and cook for 15-20 minutes until reduced by half. Stir frequently so your gravy doesn’t burn.

9. Slice brisket (against the grain) and serve with fruit, vegetables and gravy.