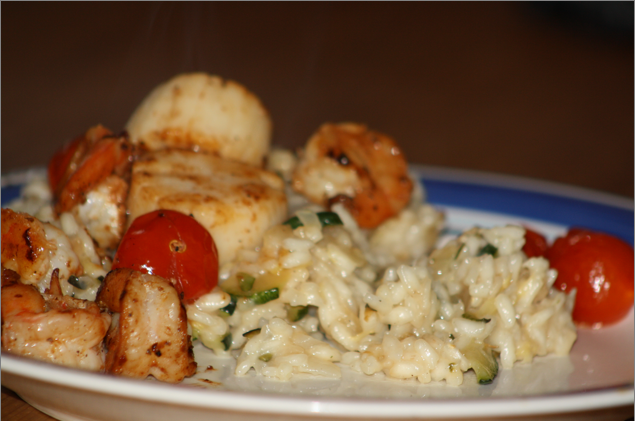 Risotto shown is a trial with shrimp and scallops, but my final verdict is that the tastiest and cheapest iteration uses only shrimp

Mariel here. It’s taken me a little longer than I’d like to cobble together my first Feast-worthy recipe, but I found one that’s up to snuff. I present (healthy!) Risotto with Shrimp and Zucchini.

I found the original recipe while cruising SELF ‘s website. I have to say, they do a fantastic job creating healthy menus, though some of them aren’t totally mini-kitchen- and wallet-friendly. SELF‘s Summertime Risotto from Chef Todd English however provided enough inspiration to create a cheaper, but equally tasty alternative.

In order to satisfy my budget – and my lack of kitchen appliances – I swapped out the 18 large deep sea scallops (which would’ve cost me $22) for shrimp, added a little cayenne, toned down the lemon juice, and skipped pureeing the zucchini in my invisible food processor in favor of slow simmering it on the stove. The outcome – easy, affordable and dare I say downright delicious. I had never made risotto before and assumed it would result in a gloopy gluey mess, but either I’m a genius or it’s fairly simple. And remember, all the prices below are from Fresh Direct in NYC, so hopefully they’ll be a bit cheaper wherever you are.

Risotto with Shrimp and Zucchini
Serves 5

Directions:
1. Heat oven to 275. Gently toss tomatoes in 2 teaspoons olive oil with a sprinkle of salt and pepper. Bake on a non-stick baking sheet (I used a glass lasagna dish, for lack of a better option) for 1 hour.

2. Heat 1 teaspoon of olive oil on medium heat in a large saute pan. Saute garlic and half of the onion until the onion turns translucent. Keep stirring to avoid burning the garlic. Add the zucchini (diced well) and cook on medium-high heat for 5-7 minutes until the zucch starts to brown a bit.

3. Reduce heat to low, add a teaspoon of lemon juice and simmer the zucchini/onion mixture for 20 minutes, stirring occasionally. I also added a pinch of salt and pepper.

4. Heat 1 Tablespoon of olive oil in a large saucepan on medium heat. Saute the remaining onion until translucent (keep stirring so the onion doesn’t stick to the bottom of the saucepan).

6. Slowly pour in the wine bit by bit stirring continuously, let the rice absorb the wine.

7. Add chicken broth 1 cup at a time until absorbed, stirring continuously for 20 minutes until rice is tender. I used 2.5 cups of broth total.

8. Once rice is cooked to your liking (should be tender, but I don’t like mine too mushy), stir in the zucchini mixture, butter and parmesan. Set aside (uncovered).

9. Heat 1 Tablespoon olive oil in a large saute pan. De-shell shrimp and salt and pepper both sides. Add a light sprinkling of cayenne to one side of the shrimp. Cook shrimp on medium-high heat until both sides are lightly browned. Add tomatoes from the oven (whole cherry tomatoes) and saute for 5 minutes.

10. Spoon risotto onto a plate and top with shrimp and tomatoes.

11. Store leftovers in separate containers – i.e. risotto mixture in one sealed container, shrimp/tomatoes in another. That way your rice doesn’t take on an overly-fishy flavor the next day.