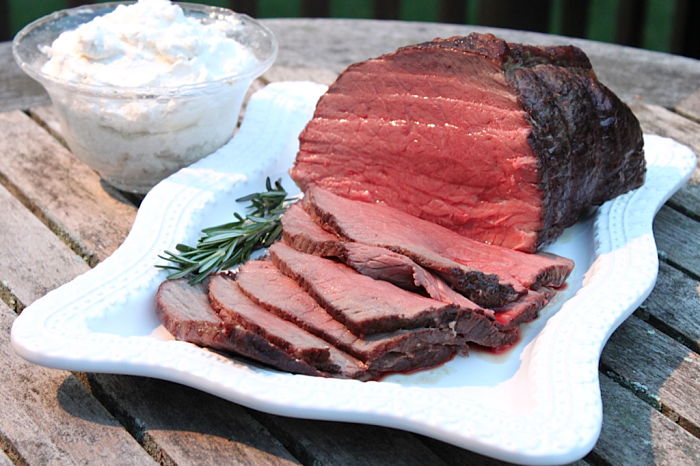 Mary Anne here. I must confess, I am not an ardent carnivore, but some of my warmest childhood memories center around Sunday family dinners. Oftentimes my mom would pull out all the stops and serve her bawdy brood a rare roast beef complete with all the trimmings. In those days, we ate gravy and butter and all things now deemed deathly to our arteries. Well, my beloved madre is turning 87 next week and she still works FULL-time; she drives herself to that job every day; gets her nails and hair done on a regular basis; and she’s always beautifully dressed. Guess those decadent dinners, along with the rich pies and cakes weren’t so unhealthy after all – at least not for the Ellicott/Moody gene pool!

It was in the spirit of our seemingly bulletproof genetics that I conjured up my own Sunday dinner last week. My eldest son was visiting for the weekend, and like his sister, he has a serious flair for food. We experimented with Yorkshire Pudding (a.k.a. Popovers), which resulted in a brilliant success. He and I also attempted to master the art of preparing a Tart Tatin, which was less successful, but we plan to attack that one again in the near future; and we created the most delicious version of Haricots Verts either of us have ever eaten (the popovers and beans will be shared in coming posts). Last but not least was the centerpiece of our Sunday supper: Roast Beef.

As I said at the beginning, I’m not a big meat eater, so even knowing what kind of roast to buy was confusing. There are so many cuts to choose from and the prices can be as erratic as a day on the Stock Exchange. Julia Child recommends a top loin of beef, but I learned that this cut is actually a New York strip and fetched $13 a pound! Not exactly Feast-worthy. So I took my chances after grilling a grocery store butcher, and bought a 4-pound eye of round roast for a more reasonable $3.99 a pound.

Family genes notwithstanding, we eschewed the gravy option and whipped up a little horseradish cream. It’s a spicy, creamy condiment served alongside the roast and it’s marginally healthier than a puddle of gravy. But hey, Sunday dinners are more like a biannual event in my full-grown family, so we justified our indulgence and dug into our feast with guilt-free abandon!

Note: According to my gustatory guru, Julia Child, a boneless roast’s cooking time is determined by the meat’s width and height, not its length or weight. My roast was about 3 ½ inches high and 5 ½ inches wide. I roasted it at 425 degrees for 15 minutes and then reduced the heat to 350 degrees for an additional 70 minutes. It was perfect in its rosy rareness!

Tip: Take the meat out of the refrigerator and allow it to come to room temperature about 2 hours before you plan to roast it. You really must use a meat thermometer to guarantee the degree of doneness you prefer. My family likes it rare, rare, rare – so I roasted it until the internal temperature was 120 degrees. The roast will continue to cook as it rests on the countertop.

Directions:
1. Take the roast out of the refrigerator and it allow to come to room temperature for 2 hours.

2. Position the oven rack to the upper third level. Preheat the oven to 425 degrees. Spray a roasting rack and pan with a cooking spray such as Pam. Note: The roasting pan should be somewhat shallow and just large enough to accommodate the meat.

3. Rub the roast all over with olive oil and place on the prepared rack. Insert the meat thermometer so that it is centered in the middle of the roast.

4. Season the top of roast with the rosemary, salt and pepper.

5. Roast at 425 degrees for 15 minutes. Reduce the oven temperature to 350 degrees and continue roasting until the meat thermometer registers 120 degrees for rare. (Our 4 pound roast took a total of 1 hour and 25 minutes in the oven.)

6. Allow the roast to rest on the counter top for about 30 minutes.

7. Meanwhile, prepare the Horseradish Cream by whisking together all of the ingredients. Transfer to a serving bowl.

8. To carve the roast: Using a sharp knife, slice straight down from top to bottom. If you’re concerned the meat isn’t as tender as you might like, slice it a on the thinner side.